Inspired by his late daughter's giving nature and the compassionate end-of-life care she received at the Grey Nuns hospital, Tiberio Goulart makes memorial donation through the Crane Fund for Widows and Children

Tiberio (Ti) Goulart never imagined spending months visiting a loved one at Covenant Health’s Palliative Care Unit 43 in the Grey Nuns Community Hospital, much less that loved one being his 23-year-old daughter, Kayla Goulart, who was receiving end-of-life care. After Kayla passed away on her 24th birthday in 2015 following a three-year battle with cervical cancer, Ti wanted to find his own way to honour his daughter’s selfless spirit.

Fearless, smart, caring, an enthusiastic traveler and close to her family, Kayla inspired her father with her kind heart and dream of becoming a social worker to help children.

“Kayla always wanted to give and she donated a lot of her time, so I said, you know what, it's time for me to start doing something like this as well and giving back to people who have helped us,” said Ti.

His opportunity to give back came with the help of his employer, Crane Supply, a division of Crane Co. Ti’s regional manager encouraged Ti to make a donation through the Crane Fund for Widows and Children, which contributes to charitable organizations in communities where Crane Co. operates. Through the fund, Ti donated $5,000 US to our foundation in support of the greatest needs at Unit 43 in the Grey Nuns – from specialized equipment such as mattresses that provide greater comfort for patients, to compassionate services such as bereavement support for families.

Unit 43 is an intensive 23-bed palliative care unit, providing a world-class interdisciplinary program that attracts healthcare practitioners, students and researchers from around the globe. The team focuses on the end-of-life care, comfort and quality of life of patients with life-limiting illnesses and their families.

This is the second donation Ti has made through the Crane Fund for Widows and Children to our foundation in honour of his Kayla. He describes the donation as being an important part of his healing journey and says he hopes to continue making a yearly gift until he retires.

Ti believes the care Kayla received was exceptional because of the Covenant team working there. Kayla’s mother, her mother’s partner, and Ti wanted to be with Kayla as much as possible while she was at the Grey Nuns, but whenever they had to be away, Ti felt comforted knowing Kayla was receiving the best care possible.

“They looked after her like she was their own kid,” he said. “The care was exceptional. If I ever – I hope I never do – but if I ever get sick and end up in hospice care, I'd want to be at Unit 43 in the Grey Nuns because I’d want to be well looked after.”

During one of the days the family visited Kayla on Unit 43, they painted a large art tile together as part of a research project on Unit 43 to visually represent their experience. They included symbols to represent each family member to demonstrate their commitment to taking each step on their journey together, and to show Kayla she was deeply loved, cherished and a source of inspiration for her loved ones.

Ti has plans to return to Unit 43 to visit the tile that is on display there soon. He believes sharing his story has helped make him certain he wants to go. As he explained, “It will be kind of my closure as part of my healing process.”

In their own words

As part of the healing journey for Ti and Kayla’s family, they documented their story and wrote about the symbols on the tile they created together. Here is their journey in their own words: 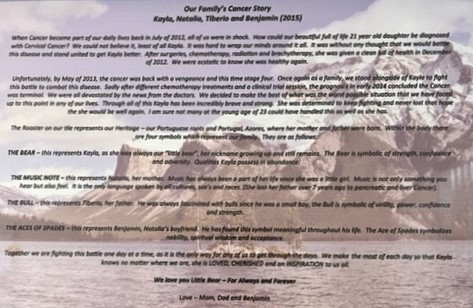 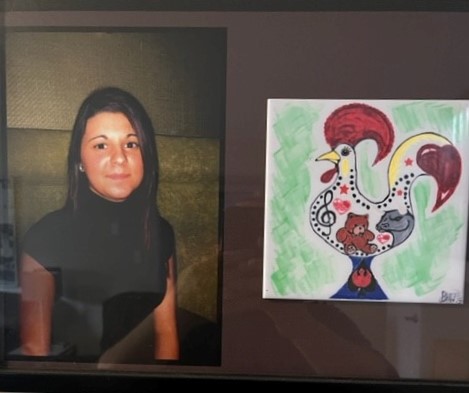 When cancer became a part of our daily lives back in 2012, all of us were in shock. How could our beautiful full-of-life 21-year-old daughter be diagnosed with cervical cancer? We could not believe it, least of all Kayla. It was hard to wrap our minds around it all. It was without any thought that we would battle this disease and stand united to get Kayla better. After surgeries, chemotherapy, radiation and brachytherapy, she was given a clean bill of health in December of 2012. We were ecstatic to know she was healthy again.

Unfortunately, by May of 2013, the cancer was back with a vengeance and this time stage four. Once again as a family, we stood alongside of Kayla to fight this battle to combat this disease. Sadly after different chemotherapy treatments and a clinical trial session, the prognosis in early 2014 concluded the cancer was terminal. We were all devastated by the news from the doctors. We decided to make the best of what was the worst possible situation that we have faced up to this point in any of our lives. Through all of this Kayla has been incredibly brave and strong. She was determined to keep fighting and never lost that hope that she would be well again. I am sure not many at the young age of 23 could have handled this as well as she has.

The rooster on our tile represents our heritage, our Portuguese roots and Portugal Azores where her mother and father were born. Within that body there are four symbols, which represent our family. They are as follows:

THE BEAR – this represents Kayla, as she was always our “little bear”, her nickname growing up and still remains. The Bear is symbolic of strength, confidence and adversity – qualities Kayla possesses in abundance.

THE MUSIC NOTE – this represents Natalia, her mother. Music has always been a part of her life since she was a little girl. Music is not only something you hear but also feel. It is the language spoken by all cultures, sex’s and races. (She lost her father over 7 years ago to pancreatic and liver cancer).

THE BULL – this represents Tiberio, her father. He was always fascinated with bulls since he was a small boy. The bull is symbolic of virility, power, confidence and strength.

THE ACE OF SPADES – this represents Benjamin, Natalia’s boyfriend. He has found this symbol meaningful throughout his life. The Ace of Spaces symbolizes nobility, spiritual wisdom and acceptance.

Together we are fighting this battle one day at a time, as it is the only way for any of us to get through the days. We make the most of each day so that Kayla knows no matter where we are, she is LOVED, CHERISHED and an INSPIRATION to us all.

We love you Little Bear – For Always and Forever 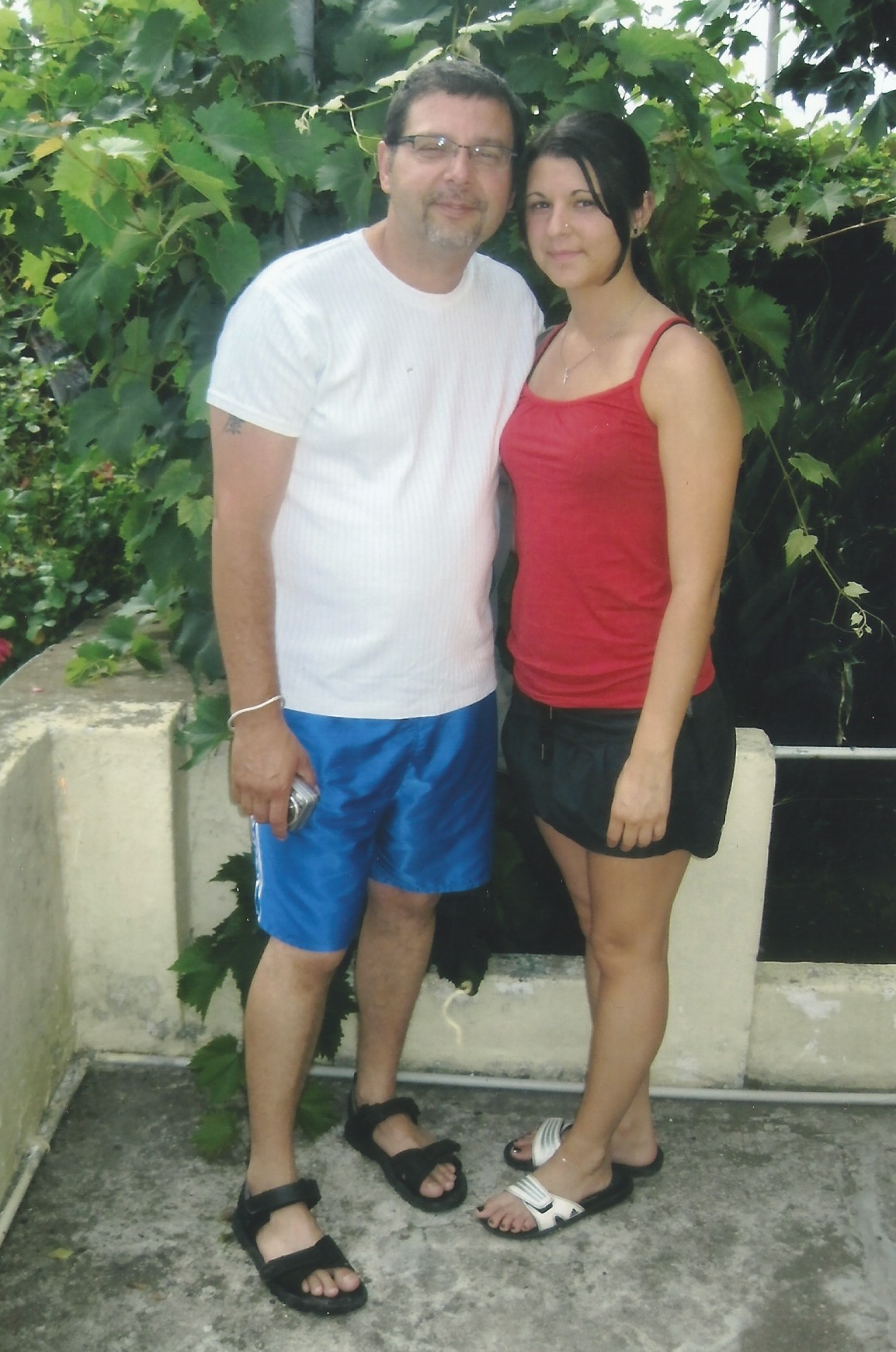 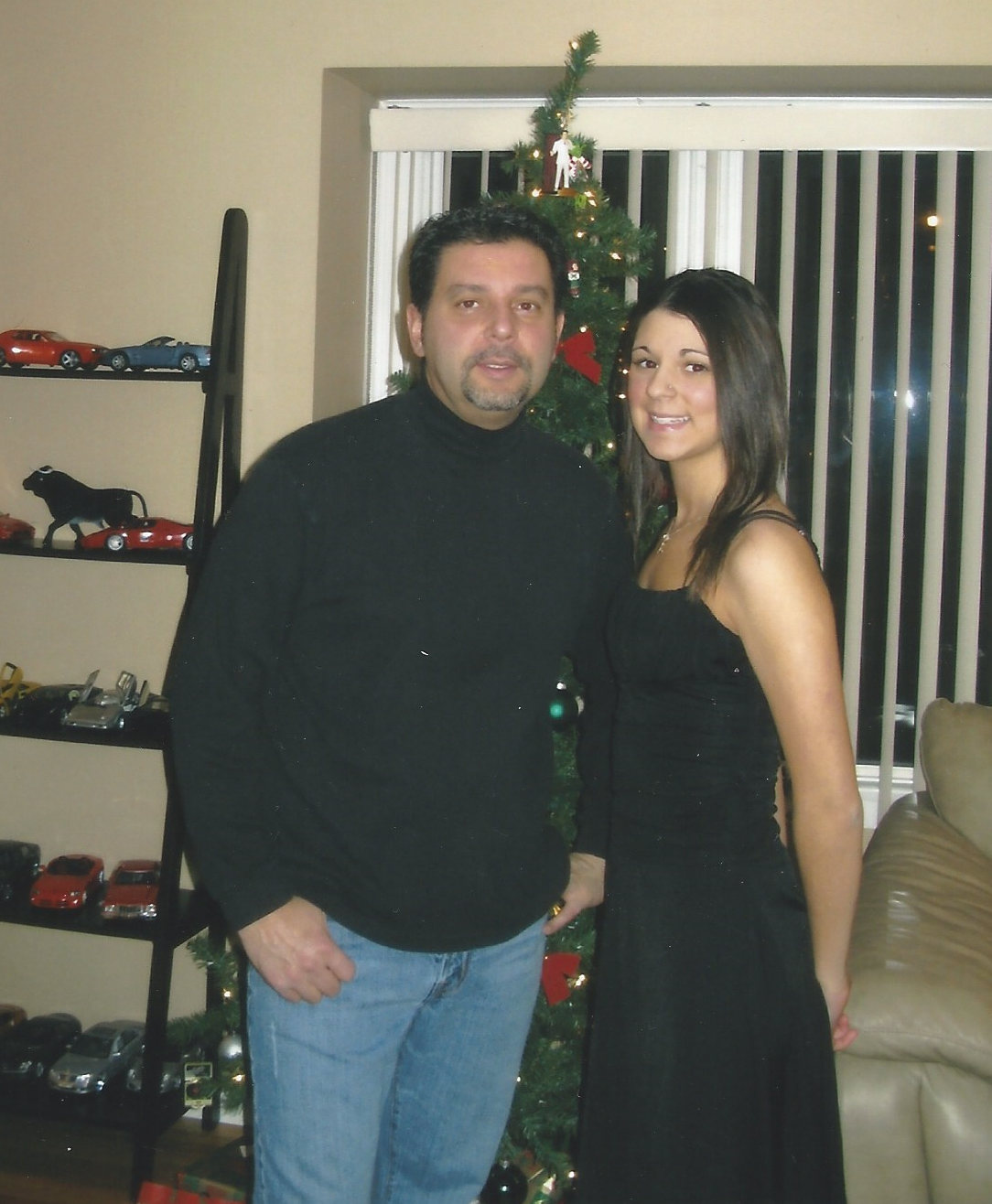 To help provide compassionate care in Covenant hospitals and continuing care sites, or to make a gift in honour of a loved one, please visit our online donation page.