Lori Semeniuk had been holding her firstborn for just a few minutes when her husband Scott noticed their newborn son was looking a little blue. Physicians in the neonatal intensive care unit (NICU) soon diagnosed baby Daxon with a pneumothorax. Essentially, a hole in his left lung was letting air into his chest cavity, making it difficult for him to breathe.

NICU staff monitored Daxon’s progress over the next week using a portable point-of-care ultrasound (POCUS), which meant he didn’t need to be moved for repeated X rays. This equipment was made possible due to two donations from the Sandra Schmirler Foundation, totaling $85,400, which were given to Covenant Foundation for both the Misericordia and Grey Nuns hospitals.

“Staff in the NICU would clamp Daxon’s chest tube and scan him before rounds,” says Lori, who arrived daily to hear the physicians’ updates in the mornings. Using the POCUS, staff could see the air decrease in his chest over time, as the pneumothorax healed.

According to Dr. Robert Lemke, medical director of the Grey Nuns Community Hospital NICU, who applied to the Covenant Foundation for POCUS funding, the system’s benefits are many. Previously, the NICU needed babies to have multiple portable X-rays, which can be disturbing to infants in a fragile state.

“Having around-the-clock access to bedside ultrasound, by trained clinicians, allows us to care for newborns in real time and make adjustments as needed,” says Dr. Lemke. It is easy to use ultrasound to assess the lungs multiple times a day, which is about as disruptive as changing a diaper. POCUS can also be used to assess multiple organs including the heart and brain, and can make achieving intravenous access easier.

It was the notion of reducing risk and discomfort for the babies that appealed to the board of the Sandra Schmirler Foundation, says Brenda Gallagher, director of operations.

“The idea that they could reduce the number of times they poke a premature baby for an IV by using the ultrasound at the bedside, it makes it much less stressful for the baby and its parents,” says Brenda.

“By preventing the transfer of infants to other sites for procedures, we’re able to keep the mother/baby dyad together, which brings higher family satisfaction.”

The location and availability of the POCUS has meant a real change to how the NICU operates. The ultrasound is used several times a day in the Grey Nuns hospital, making it a key piece of equipment that has filled a real need.

The Sandra Schmirler Foundation’s mission is specific: to raise funds for hospital NICUs to purchase life-saving equipment for premature and critically ill newborns. They also provide curling scholarships — all in honour of Sandra Schmirler, the Olympic gold medalist curler, who died of cancer when her daughters were toddlers.

The foundation aims to fund initiatives in the provinces and communities where their donors live, something the Covenant Foundation is grateful for.

“Through their generous gifts, the Sandra Schmirler Foundation is helping to equip care teams with the specialized tools they need to provide the best care and outcomes possible for premature and critically ill newborns at the Grey Nuns and Misericordia NICUs,” says Katherine Captain, vice-president of philanthropy at Covenant Foundation. “We’re very grateful to partner with their foundation to help transform care for Covenant’s tiniest, most fragile patients.” 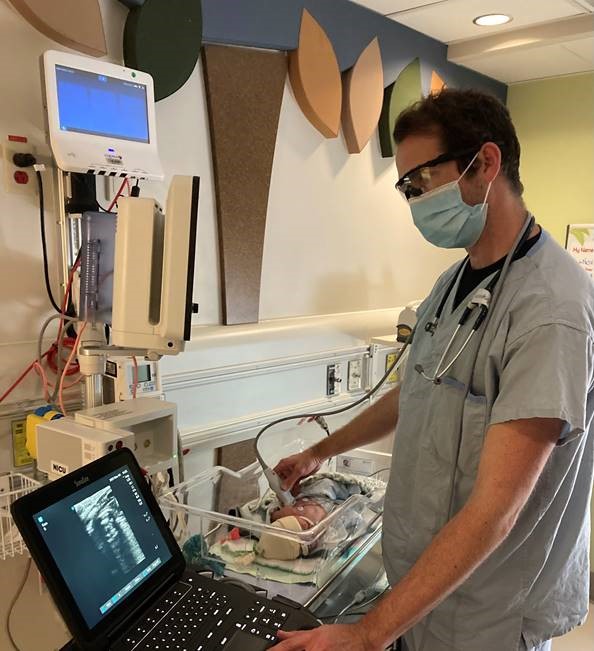 If you'd like to help support the greatest needs at Covenant hospitals, such as state-of-the-art equipment to help babies like Daxon, please click here to make your gift today. Thank you for making a difference for patients, their families and healthcare teams!